A ceremonial trowel presented to the Duke of Cambridge on 31 October 1898, at the start of building work on Colchester Town Hall, has been returned to the borough in a special ceremony hosted by the Mayor. The finely-engraved object was acquired at auction earlier this year, thanks to the generous support of the Friends of Colchester Museums and Colchester High Steward Sir Bob Russell. The trowel was commissioned by architect John Belcher, who had won the competition to design the Town Hall, and was made by London firm Mappin and Webb.
The front of the trowel, engraved with Belcher’s winning architectural design shows a smaller, less embellished clock tower than the one we know today, which James Paxman subsequently paid over £3,000 to have built. The acquisition follows the restoration earlier this year of the Town Hall’s foundation stone, which was unveiled by Cllr David King and Sir Bob Russell after it had become largely unreadable due to severe erosion. Colchester Town Hall was opened by the Earl of Rosebery on 15 May 1902. For over a century it has been one of the great landmarks of the town, decorated in statuary and stained glass that details the town’s long history and memorialises those who created the building as much as those who are represented upon it.

The Mayor of Colchester, Cllr Nick Cope, said: “On behalf of the residents of Colchester, I would like to thank the Friends of Colchester Museums and Sir Bob Russell for their care and generosity in securing the trowel’s safe return to the borough and permanent display in the Town Hall. “It is almost providential that the trowel should have reappeared after all these years, so soon after the restoration of the Town Hall foundation stone to which it is so closely connected.”
Sir Bob Russell said: “This is a wonderful addition to the collection of memorabilia on display in the Grand Jury Room. The engraved trowel is an important part of the story of the building of our wonderful Town Hall, and to have it returned to the building is very special.” Patrick Denney, of the Friends of Colchester Museums, added: “The Friends of Colchester Museums are delighted to have assisted in the purchase of this trowel, which has enabled it to be returned to the town after more than 120 years. The trowel was created to mark the very beginning of what became one of the grandest buildings in Colchester, and to have it put on permanent display in that very same building, for all to admire, is an added bonus.”
(Photos/report courtesy Colchester Borough Council.) 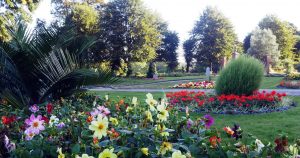 A full programme of talks and visits is in place for 2019. Here is just a taste:

VISITS range from a historical tour of Castle Park to a full-day trip to Chatham Dockyard. EVENING LECTURES start 9th April and include talks on Paxman’s; Peter Froste’s pictures; + other aspects of local history. DAYTIME LECTURES continue with a talk on Bourne Mill. Details: see LECTURES in top menu. See our latest newsletter – click ARCHIVE and NEWSLETTERS in top menu.

If you ‘like’ us and share with your friends and family it’ll help spread the word and help us assist the museums even more! Thanks.

In the meantime why not call in and see us at the COLCHESTER FESTIVAL OF LIFELONG LEARNING – Firstsite Thursday July 5th 10am-6pm • Full details click> www.ColchesterLearningTown.org 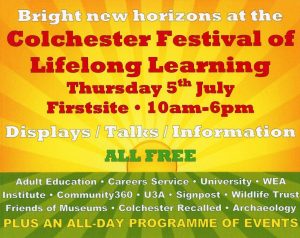 Len was an original member of the Friends, founded in 1949. His memories in the form of a beautifully-illustrated Friends’ 50th Anniversary Address (1999) are now available by clicking on  Archive / Other in the top menu.

UPDATE: As these have been successful, the Committee is considering a further series next season. Watch this space!

ACQUISITIONS – Paintings “Portrait of Mrs Daniell” & “View at the Hythe”

A charming portrait of Ethel Daniell was painted 100 years ago by Frank Daniell. It was found in the attic of 8 East Hill, Colchester by Betty & Norman Warner (pictured with Mr Warner’s Hythe painting) , who bought the house. It was damaged and they arranged repairs.  The Friends have acquired it to join the 22 other works by Frank Daniell in the Museum collection. Further details in 2016-17 Annual Report in ARCHIVE section, top menu.

The plaque reads “Frank Daniell, (1866-1932) artist and portrait painter lived here and 15a High Street”. At the same time Norman Warner presented his own painting of a scene of the Hythe (above). The Museum has few views of industrial Colchester so it is very welcome.

This was found in September 2015 during a metal detecting rally on farmland at Boxted, Essex.  Made of silver, set with a cornelian intaglio, or engraved gemstone, it dates to the period 1200 – 1400. Further details in January 2018 Newsletter in the ARCHIVE section, top menu.